I clearly have a lot of confessing to do.  I’ve been publicly pouring it out through this blog.  Why?  Because it is incredibly freeing, and freedom is addictive.

Christianity practices a confession of faith and a confession of sin.  We confess faith publicly, usually before baptism or confirmation, just as we confess love for our soon-to-be-spouse at a wedding.  Why?  To hold ourselves accountable.  We promise out loud to others because it makes it harder to break that promise if everyone knows about it.

So why should confession of sin be any different?  I’m not saying spilling it out onto a blog is the best route, but instead of letting shame keep us hidden, what if we let it drive us to Jesus through the church?  What if we felt forgiven instead of stoned?

Therefore confess your sins to one another and pray for one another, that you may be healed.  The prayer of a righteous person has great power as it is working.     ~James 5:16

Whoever conceals his transgressions will not prosper, but he who confesses and forsakes them will obtain mercy.     ~Proverbs 28:13

Also many of those who were now believers came, openly confessing and divulging their practices.     ~Acts 19:18

I admit, I haven’t been great about confession in the past.  In the comfy playpen I built for myself, I installed blinds.  Blinds that could be closed to hide sin.  I’m a “good person” and I always “mean well”.  Surely God knows I’m trying.

Yes.  Just like He also knows that I’m ignoring His commands. 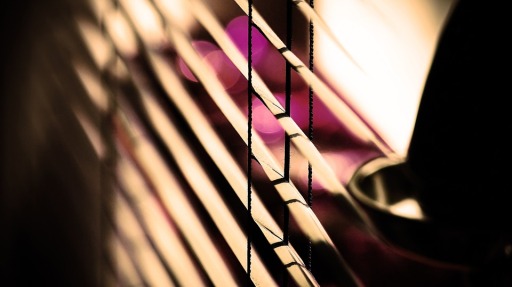 A small streak of light slips through the blinds.  Enough to encourage a short, I’m-sorry-for-whatever-I’ve-done prayer.  But it’s not enough. My laissez-faire attitude toward the acts that killed His Son is unacceptable.

He led me to Leviticus to talk about sin.

But instead of feeling as if there is no hope for us, we must focus on how He created a way for us.

In fact, the law requires that nearly everything be cleansed with blood, and without the shedding of blood there is no forgiveness. ~Hebrews 9:22

In the days of Leviticus, the sinner had to bring an innocent, perfect animal to the altar.  He had to slit its throat, see the blood on his hands and watch it die for his mistake.

Back in my playpen, I close the blinds tighter, grateful that I don’t have to physically kill an innocent animal every time I sin.  There would be so much blood on my hands.  And yet I can’t help but wonder if seeing that blood would make me think twice.  Would it make me take sin seriously enough to prayerfully consider every action first to avoid the penalty?

Surrendering to God throws open the blinds and lets the light stream in.  The scene is harsh and I want to cover my eyes like I always have, but I can no longer look away.

There IS blood on my hands.

He was brutally, painfully crucified because of my sins.  He went to the altar and He willingly laid down His perfect, innocent life so that I have a chance to experience God.  Do I even use that chance that He died for, let alone remember how much He paid to offer it?

Those quick “I’m sorry” prayers in the privacy of my closet let me skip past humility.  I must take time to somberly consider the blood of Jesus when I ask for forgiveness.  I need to visualize His blood on my hands.  A genuine remembrance of His painful sacrifice shines light on His love.

Moving out of the playpen brings with it a whole new level of accountability.  Once you know, you can’t un-know.

I’m willing to bet you’re still uncomfortable with His ways.  I am too sometimes.  Stealing a pencil can’t be as bad as murder, right?  Obviously.  But such a thought requires caution.  After a minor sin, we love to flippantly say, “It’s not like I killed anyone.”  But it is exactly like that.  We believe that Jesus died for the sins of everyone in the whole world.  I often have to remind myself that “everyone” includes us Christians.  So looking at that truth in full light means accepting the fact that our sins killed God’s Son.

Still struggling to accept it?  Me, too.  Perhaps it would help to consider a teaching from Jennie Allen – it’s not the weight of the sin that determines its worth, it’s the weight of the judge.  Bringing the act of stealing before my best friend is easier than bringing it before my mother.  Bringing it before my mother is easier than taking it to a court judge.  Bringing the sin before our Most Holy God? It makes my heart race just typing it, because He has more authority.  It is not to be taken lightly.  Each sin drives a nail into His hands.  So while stealing a pencil doesn’t seem like much in comparison, the question is whether something as silly as stealing a pencil is worth driving a nail into His body.

Even so, we can’t let the weight of it keep us from running back to Him to accept His mercy.

I offer you one more example.  Numbers 21:4-9 tells about the time God was curing people of snake bites, a curse brought on by their sin, by having Moses raise up a bronze snake on a pole. Those who were bitten were cured when they looked at the snake on the pole and believed they would be healed.

This is an amazing foreshadowing of Christ, discussed by Jesus Himself in John 3. But snakes are evil, right? Why is Christ portrayed as a snake?  Because the bronze snake embodied the curse on the people…they had to look at their curse to be cured.  Christ embodied our sin on the cross…He took on all of it…we have to look at it to be cured.

One reason He died such a nasty brutal death is because sin is nasty and brutal. But we have to look at it to truly move past it. It’s hard to look at it. It’s disgusting and sad and gruesome. But I can tell you from experience, looking at it and seeing ALL of it for what it really is, forces one to feel the gravity of His love. It’s more powerful than I’ve ever been able to express in words.  It’s a more consuming love than I’ve ever felt before.  Looking at it drives me to actions I didn’t think were humanly possible, but now I can’t stop trying to live for Him. Every breath, every moment, every action is His. Truly and for real.

THAT’s why it’s worth it to look at every sin. So that we can start to fathom the greatness of His love.  It’s a whole new level of understanding regarding grace and mercy and sacrifice.

How do we even begin this process?  I had to baby-step my way closer by first learning to believe He loves me enough to forgive me. Now I’m pushing through the surface level stuff and asking God to show me what was hidden DEEP, beneath my cleverly wrapped good intentions and well worded justifications.  I’m finding the stuff that “busy” convinced me to ignore.  I’m leaning into my Catholic brothers and sisters and finding tools like an Examination of Conscience and learning the power of confessing to a priest.

God has given us the way out of the mess we’ve made.  That way is Jesus.  But we have to be willing to go to Him even if it hurts.  That hurt is worth it because it’s nothing compared to His love.

Even so, we don’t have to confess.  We can close the blinds, and He will honor that barrier we’ve chosen.  But do we really want to stay locked in our self-made playpens for eternity?  Or would we rather enjoy the freedom of coming into the light?

Consider the words of Jesus, as heard by Saint Maria Faustina, “The soul that will go to Confession and receive Holy Communion shall obtain complete forgiveness of sins and punishment…Let no soul fear to draw near to Me, even though its sins be as scarlet.  My mercy is so great that no mind, be it of man or of angel, will be able to fathom it throughout all eternity…Mankind will not have peace until it turns to the Fount of My Mercy.”

*For basic examples on how to get started with facing sin, try Choose the Hug.

*For more perspective on honoring Jesus’ sacrifice, try The Survivors.

*To go deeper with the story of the bronze snake, listen to Michelle Nezat’s podcast #103 – You Are Loved.

*Click here for a written example of an Examination of Conscience, or if you prefer podcasts, Father Mike Schmitz has one of the best on this topic.

*To explore the Catholic position on confession, try The Forgiveness of Sins.

*I was especially fascinated with the early church writings, during the time right after Christ’s resurrection and the apostles.  If this also interests you, try Confession, as many of those writings are concisely listed.

*To better understand Christ’s love and desire to forgive us all, read Divine Mercy in My Soul, the diary of Saint Maria Faustina Kowalska.  It’s one of the few books that has actually changed my life in a way that can never be undone.  I will even send you a copy of it for free, all you have to do is ask.

*This is tough work that can knock the wind out of you.  The music of Lauren Daigle always seems to help lift me back up.  Try How Can It Be and I’m Yours.

One thought on “I Confess”