Note to self:  You ARE capable of trusting what you cannot see. 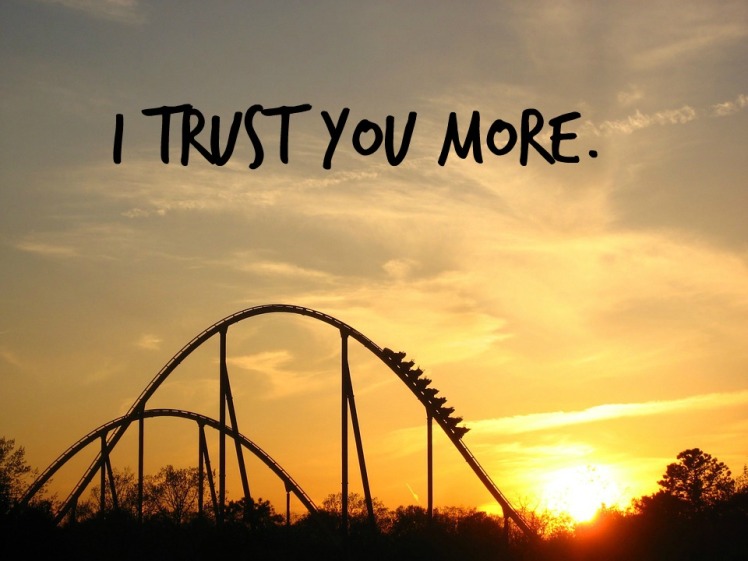 I used to really love roller coasters.  Something about the anticipation that builds as I wait in line, inching closer as the mighty beast roars over my head chased by screams of panic and delight.  I craved the adrenaline rush of conquering fear through speed and twists and turns that don’t quite seem possible.

But the last time I got on a roller coaster felt different.  Maybe it was because I’m older and have lost that ability kids have to assume nothing bad will ever happen to them.  Probably it was because my own kid was sitting beside me, looking so small in the harness that I suddenly didn’t trust it to protect her.  But she was looking at me with that same grin I used to have and the “let’s do this” kind of confidence that I was suddenly lacking.

And so we rode the beast.  As it was clickety-clacking up the first steep hill, my mind was racing through everything I didn’t know.  I had no idea how this thing was put together.  Or how it worked.  Or whether it had been tested for safety today – or any day.  I didn’t know the people that had designed it, built it, tightened its screws (are there even screws on this thing?!?), or the bored-looking teenagers who were running it.  Did they know what to do in case of emergency?  Were they paying attention during that part of the training?  Was there even training taking place?!?

Needless to say, that was not the best roller coaster ride I had ever been on.  I spent the entire ride with my now-extremely-sore-arm across my daughter, as if that was enough to defy whatever gravity had in store for us.  But in my fear that day emerged a hint of truth.

I struggle with trusting God sometimes.  Okay, a lot of the time.  And one of the excuses I give myself for this is that it is just hard to trust what I cannot see.  Yes, I’ve learned that I can “see” God through nature, and His people, and His answering of my prayers.  But that last stumbling block of not being able to see Him physically as I see everything else, has held me back from real trust.

Yet, I get on roller coasters.  And I drive cars.  And I ride in airplanes.  I cannot see the people who built them.  I do not know their story or who they are or what they believe in.  But somehow I trust them enough to let them hurl me and my precious children across the world at insane speeds.  Why do I trust these complete strangers, but I still struggle with trusting God?

Even if I don’t feel that I completely know Him, I know Him better than I know the random roller coaster operator.  I have read His story; I know that He created the intricately amazing universe.  I know he designed my body to work perfectly, even though I have no idea how.  I have survived bringing two more lives into this world, and there is no other explanation for those miracles than that He made it possible.

He obviously knows what He is doing.

And I obviously am capable of trusting what I cannot see.

He deserves my trust more than complete strangers do.

It’s time to stop leaning on excuses that I am proving wrong on a daily basis.

But I’m not great at sudden change – I need constant reminders.

Every time I board an airplane, ready to warp across the planet, I think about how we’re sitting on tens of thousands of gallons of fuel and hundreds of thousands of moving parts, built by the lowest bidder (thanks, Rockhound).  And then I say a prayer – I trust You more.

The next time I get on a roller coaster, I’m going to enjoy the ride instead of counting the reasons not to.  (Because in case you were wondering, you’re more likely to die falling out of bed than on an amusement park ride.)  And then I’m going to say a prayer – I trust You more.

For since the creation of the world God’s invisible qualities—his eternal power and divine nature—have been clearly seen, being understood from what has been made, so that people are without excuse.         ~Romans 1:20

Jesus said to him, “Have you believed because you have seen me? Blessed are those who have not seen and yet have believed.”       ~John 20:29

One thought on “I Trust You More”